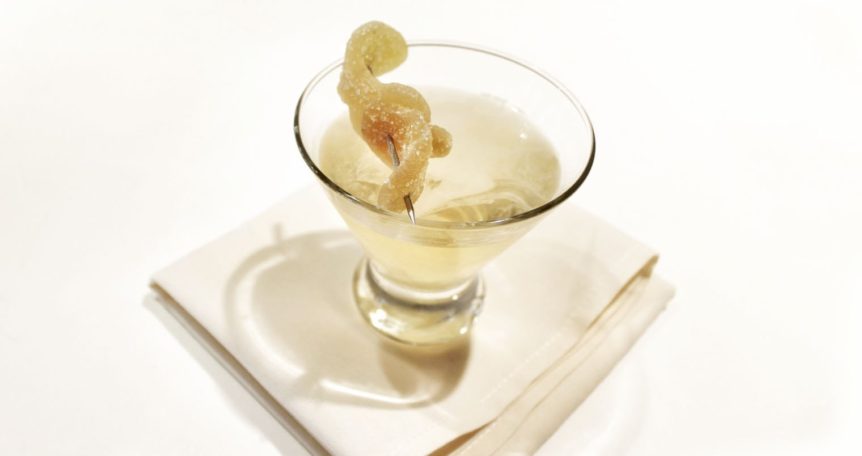 Hellenic import Lefty Goumas gingered up the classic martini into an Upper East Side staple.
True story: If you are prone to motion sickness, chew on some ginger. A 1982 study from Brigham Young University found powdered ginger was better at curing a tummy tantrum than Dramamine. And way cheaper. Probably none of that figures into the equation when Lefteris “Lefty” Goumas garnishes a Ginger Martini with a silver of its namesake spice, but it would make for some fun, if completely random, bar talk. One of the signature cocktails of TBar, a power-address steakhouse on Manhattan’s oh-so-posh Upper East Side, the Ginger Martini is a sweet, zesty, and decidedly Continental cocktail, and so much more than an odd trivia point. That Goumas learned his craft on the sunny Mediterranean shores of Greece makes him all the more the man for the job when it comes to describing this sophisticated concoction’s taste and the image it inspires:

“The ginger martini combines the sweet notes of orange with the spicy taste of ginger and creates a refreshing cocktail for anyone that would like to feel like they’re on vacation,” he says, painting with words. “It’s the French Riviera in a sip.” Preparation: Fill cocktail shaker with ice cubes, add in vodka, Domaine de Canton, and Grand Marnier cover and shake well. Pour into a martini glass, and garnish with candied ginger on a pick.

See your recipes and story featured by joining The Chilled 100.