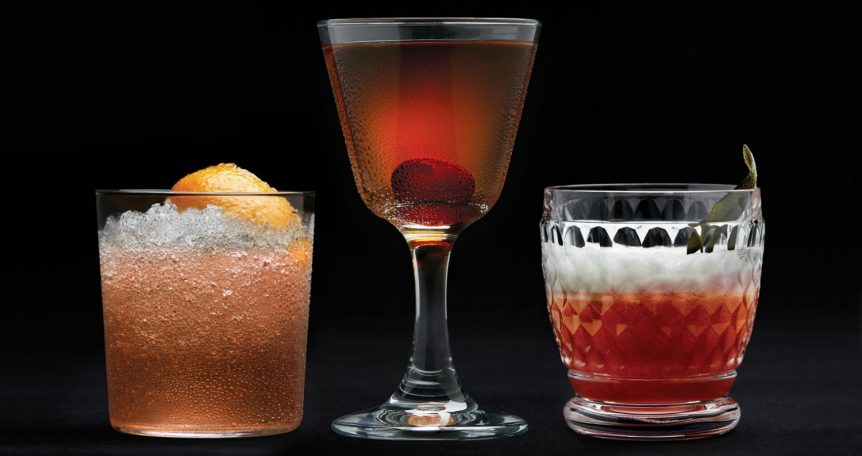 At Bushmills, we’re all about firsts.

About challenging the status quo. It’s part of our DNA. Four hundred years ago, when most folks in Northern Ireland were farming or making linen, we were creating the world’s first commercial distillery. That spirit of “jumping in” and doing something new is how we still live and act today. And it’s exactly why we asked a handful of the CHILLED 100 ambassadors to create one-of-a-kind cocktails using our unique Black Bush whiskey. Join us in celebrating the big day on Thursday, March 17th with these five exciting Bushmills Black Bush libations created by the CHILLED 100 that will make a big impact at your bar. Sláinte! Ben is currently the bar manager and a co-owner of Miami’s Beaker & Gray in trendy Wynwood, where Miami’s art crowd does their thing. He’s a Miami native who began working in bars in 2009 when he left the world of investment banking. Since then he has been selected twice as one of the Top 10 Bartenders in Miami by Miami New Times and nominated for Best Bartender in the city by Eater. He has done time at Miami Beach’s acclaimed and highly awarded Broken Shaker, using fresh ingredients, house-made products, and an interesting selection of back- bar spirits to create exciting libations. His Black Bush innovation is derived from the classic Emerald cocktail.

Inspiration: Bushmills comes from one of the oldest distilleries in the world and is dedicated to producing whiskey with traditional methodologies. The Black Emerald is derived from the classic Emerald cocktail, but has ingredients adjusted to suit the nutty and sherry-barreled Black Bush whiskey more effectively. Naomi Levy is one of Boston’s most promising young bartenders. Starting at the age of 17, she was hooked by the pace and rhythm of restaurant service and drawn to the challenges of the bar. She’s best known for her time at Eastern Standard where she worked her way up to bar manager at the 10 year-old landmark. Under her leadership the popular spot was awarded Best American Restaurant Bar at Tales of the Cocktail.

She was named one of Zagat’s 30 under 30 in 2014 and is dedicated to her craft, wanting to “create a unique and memorable experience on what could be someone’s one night out all month.” Naomi’s Waltzing Matilda emphasizes the avors of the season, expertly melding Black Bush with a trio of syrups: cinnamon, almond and barley malt.

Inspiration: This cocktail was inspired by the backbone of whiskey, barley. Here, I used barley malt syrup to boost the cereal notes of the Bushmills Black Bush and played off some of the pear and orchard fruit notes from the whiskey to pair with cinnamon and almond. Preparation: Break up 5 cinnamon sticks and toast. Add 2 cups of granulated sugar and 2 cups of water. Allow to come to just under a simmer and let stand for 20 minutes. Remove from stove and place in an airtight container.

Allow to sit in refrigerator for 24 hours before straining. Combine all ingredients in a mixing glass. Add ice and give a quick integration shake. Strain into a rocks glass and top with crushed ice. Garnish with fresh shaved cinnamon and a long orange twist. Justin Roberts is a Southern California native with immense experience beyond his years. He started bartending in a high volume environment, eventually moving into craft cocktails, where he’s remained for the majority of a career spanning 11 years. From Orange County to Portland to L.A., he’s been a perennial favorite on the nightlife scene and has enjoyed every moment behind the stick. Recent highlights include proudly becoming a member of the Chilled 100 and winning a competition that took him to Ibiza, Spain. Visit him at L.A.’s La Descarga, a super premium rum bar that dishes up tasty cocktails, live Latin Jazz and an incredible burlesque show. His Black Bush cocktail, Before the 29th, typifies his indie spirit.

Inspiration: I just had an impulse to use blackberries for this cocktail and it turns out that Irish tradition dictates one should not pick blackberries after the 29th of September thus the name. Before the 29th / Photo by David Allee

Preparation: Place 1 cup of black berries and 1 cup of water in a pot and bring to a boil. Bring down to simmer as soon as water starts to boil. Simmer for approximately 30 minutes and strain. Match the amount of liquid you have, 1:1, with super fine sugar. Stir until sugar is fully dissolved. Place in refrigerator to cool before using.

Muddle sage leaves then combine all ingredients in a tin and dry shake well. Add ice and shake well again. Strain into a double rocks glass, neat. Garnish with a torched sage leaf. In just four short years as a barman, 27 year-old Brett Esler has managed to build an impressive career. Hailing from the Midwest, he spent seven years in Arizona before moving to Austin, Texas two years ago. There he can be found behind the stick at Whisler’s and Mezcaleria Tobala, a mezcal tasting bar. He has worked alongside top culinary talents and was named one of Zagat’s 30 under 30 last year. He favors a refreshing citrusy drink but any mention of St. Patrick’s Day will get him dreaming about Irish whiskey and Guinness, so much so that he combined them both for The Irish Diplomat, an Irish variation of the classic Old Fashioned.

Inspiration: The goal was for this drink to appeal to both cocktail and beer drinkers alike. Working at Whisler’s where our Old Fashioned is our best seller, I was inspired to create a St. Patrick’s Day-esque Old Fashioned variation. This cocktail is an Irish variation on a classic Old Fashioned with the goal of appealing to both cocktail drinkers and beer drinkers alike, hence the diplomatic name. Cheers!

Preparation: Bring 1 1⁄2 cups of Guinness to a quick boil, turn down heat, and let simmer for 25-30 minutes or until Guinness has been reduced by half. Add equal parts turbinado sugar (3⁄4 cups turbinado: 3⁄4 cups reduced Guinness) and stir until dissolved. Let cool before using.

Add all ingredients to mixing pint, stir 20 seconds until properly chilled and strain into an Old Fashioned glass over 1 large rock. Express orange oils from orange peel into drink, place as garnish, and serve. Zach is a Boston native who was drawn to New York because of its thriving cocktail culture. There he helped re-open the landmark Knickerbocker Hotel last year personalizing many of the cocktail recipes at Charlie Palmer at The Knick. He likes to focus on reworking some of the forgotten classics with new and exciting ingredients. His Black Bush creation is a variation of the Little Bit Country.

Inspiration: The goal of my cocktail menu at The Knickerbocker Hotel is to take classic cocktails and old forgotten recipes and rework them with new and exciting ingredients, like our signature cocktail The Knickerbocker Martini. For my Black Bush cocktail, I decided to create a variation of the Little Bit Country, swapping the maraschino for sherry to mirror the sherry notes found in the whiskey and adding egg whites to give the cocktail a smooth and creamy mouthfeel. Preparation: Add 4 oz. of hot water to 16 oz. of maple syrup and stir. Add one sliced jalapeño and let sit for 8 hours. Strain and refrigerate. Dry shake, then shake over ice, serve in a coupe glass with Angostura bitter garnish and a jalapeño.