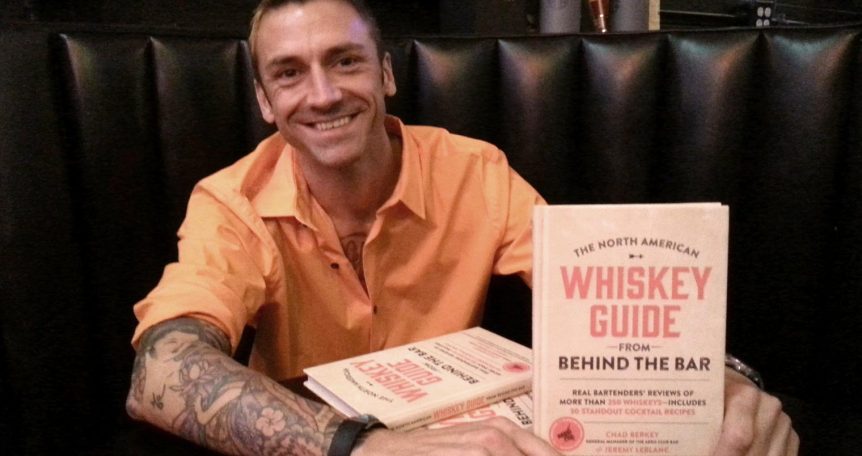 After being in the bar business for 28 years, Chad Berkey has a lot to be proud of. But if you ask him what matters most, he says without a pause,

“My son. I love this industry and it has provided a great life for us. Working nights allows me to spend my days with my family and that’s very important to me.” You’d think Berkey would have little time left for anything else, but he manages to squeeze in far more than being a father, the General Manager of Aero Club, and a member of the Chilled 100. He is also the co-creator/owner of Tin Play Innovative Barware (TinPlay.com), which owns five patents for their bartender-designed products. He also travels a great deal in his role as Master Mixologist for Libbey Food Services & Glassware, and is the author of “The North American Whiskey Guide From Behind The Bar.” Berkey even managed to host the first Southern California Round Up discussion for the Chilled 100.

“I’m always looking for new projects and challenges but at the moment I’m slammed and it’s a great problem to have!” While his Guinness antics are amazing, he cautions new bartenders not to go for the gimmick, but to learn as much as they can.

“Don’t focus so intently on one thing, wheather it be flair, ultra craft cocktails or even speed. A truly great bartender can do a little bit of everthing. Keep an open mind and learn something from everyone you ever work with. Always give great service, you never know who the person is your about to serve. Some amazing things have happened to me simply by being nice to people.” Chad Berkey is the co-inventor/creator of the Tin Play Innovative Bar Ware System and Author of The North American Whiskey Guide From Behind The Bar.

Chad has a vast and varied experience, having worked in all facets of the bar and restaurant industry over his 22 year career. He is recognized as one of San Diego’s top and most knowledgeable Mixologist and currently manages and bartends at one of San Diego’s most established bars, The Aero Club. The Aero Club, boasting a selection of over 900 whiskeys, was recently named Maxim Magazine’s Bar of The Month, was featured in the New York Times segment 36 Hours as well as receiving numerous other accolades. Chad has been featured on The Food Network, Tonight In San Diego, San Diego Living, The CW Channel 6, Bucket List Bars, Americas Dining and Travel Show and is currently a mixologist for Blue Ice Vodka, an Ambassador for Chilled Magazine, and a National Mixologist for Libbey Glassware.