With its intricately arched ceiling, towering chandeliers, verdant potted palm trees, and long history as a celebrity haunt, Le Sirenuse Champagne Bar at Four Seasons Hotel at The Surf Club is nothing if not a destination to experience the New Golden Age of Cocktails. One sip of something from the cocktail menu, however, and guests may find themselves transported somewhere else. “We are creating things that take people to different places,” explains Valentino Longo, who as Head Bartender oversees every detail behind the elegant four-cornered bar, including and especially the menu. “When people go to a restaurant they expect something different from the chef, not from the bartender. My goal is to surprise them.”

The bar concept Longo has created is built around “perfumes” – a.k.a., “edible aromas” – that, thanks to a recommendation from a team member, he sources from a Chicago-based “cocktail apothecary.” Like a stylish couple headed out for an evening, every one of the bar’s signature cocktails gets a spritz of aroma en route to the guest.

Longo didn’t glean his cocktail concept from a competing bar or beverage industry report. Rather, he was inspired by scents that he noticed during a two-month backpacking trip in Japan. “I went from north to south getting inspired,” he remembers. “The first thing I would noticed whenever I walked into a place was the aroma: candles in a spa, seafood in a fish market.” Result? A “different style of cocktails people don’t expect.” The perfume concept is particularly well suited to the legendary address – and Longo counts himself fortunate to be where he is. “The Surf Club was the place that hosted Hemingway and Sinatra back in the day. It was very extravagant. Four Seasons wanted to do something different here, and management has been very open-minded. They’re pushing me to be creative.” Longo has a long history of that. Born and raised in Rome, he grew up longing to follow his grandmother and sister, both chefs, into the restaurant business. “My dream from childhood was to open a coffee shop, but I didn’t like getting up early. So I thought about a cocktail bar.”

So he took a job as a bar back at Hotel de Russie, and quickly found a mentor in the manager of the hotel’s landmark Stravinskij Bar, who educated him “slowly and seasonally.” While his talents behind the bar progressed, Longo knew he needed to advance his English, so headed to London and landed behind the bar of a five-star hotel.

“London was where I really began to realize the importance of being a bartender,” he recalls. “People drink all sorts of cocktails in London, and they drink more than one. Not like in Rome, where it’s one and that’s it.” Longo’s creativity with spirits grew as he kept the cocktails coming. Soon enough, his talents got noticed, drawing attention of visiting managers from The Ritz Hotel who invited him to interview and recruited him as a main bartender. “I’ve been very fortunate: Every time I’ve changed jobs it has been because someone has seen me behind the bar.”

Longo remained at The Ritz for just over a year, during which he returned to school to “learn all the standards,” and then moved onto Bam Bou Speakeasy and Restaurant, where he developed a taste for Japanese whiskeys and expanded his responsibilities to include preparation of house-made ingredients, staff training and more. He also began competing in international cocktail competitions, often placing near the top. After competing in the European finals of one such competition Longo decided to cool his heels backpacking in Japan. “I’ve always been passionate about the concept of hospitality in Japan and I wanted to experience it.” He wasn’t disappointed. “From the taxi driver to the chef, when you are their customer you are the most important person of the moment.”

Longo eventually found his way to La Moderna, the Italian Restaurant chain, where he wound up as executive bar manager with oversight of two outlets in Rome and Miami. True to form, The Surf Club recruited him for the Champagne Bar from the latter.

Now quite content as a Head Bartender for Four Seasons, Longo can look back satisfaction that he has “come quite a long way in a short amount of time.” He’s in no rush to go anywhere else, either. “I’m really a laid back guy,” he says with a warm laugh. “When I’m not behind the bar, I’m happy just relaxing at home.” 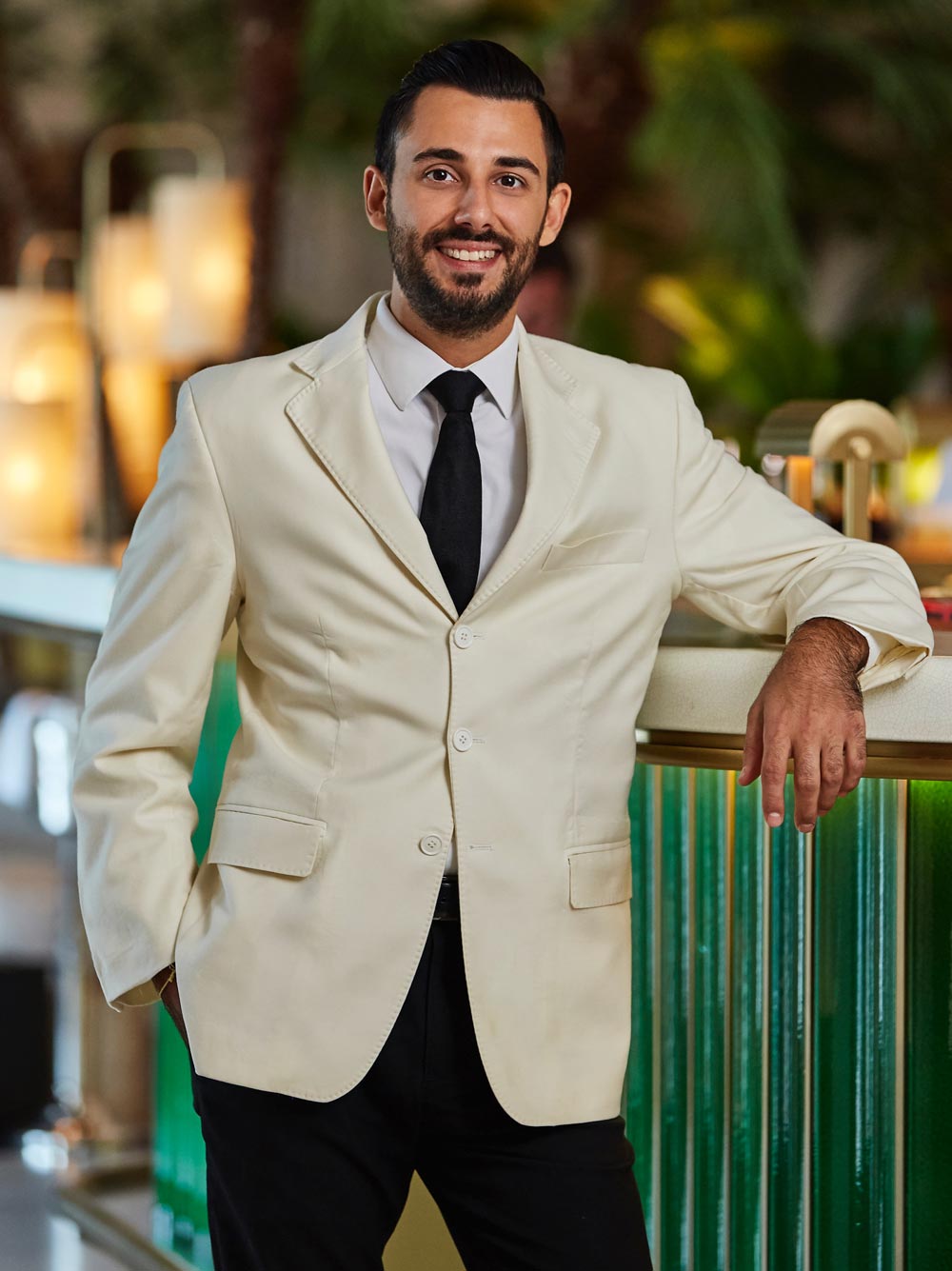