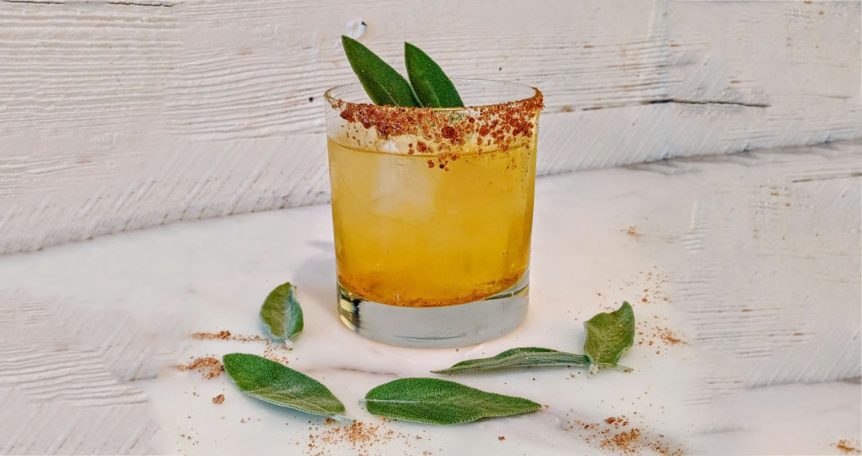 “I love to create cocktails that feel off the beaten path,” CHILLED 100 member Paula Lukas says.

“Hatozaki Japanese Blended Whisky is very versatile and a great base for a spirit-forward fall cocktail as it’s warm and toasty yet delicate with notes of honey and citrus. I decided to add Apologue Saffron Spiced Liqueur and Vicario Dragoncello Liqueur. The flavors of saffron, cardamom, coriander and French tarragon really enhance the drink and blend beautifully. I then added just a touch of lemon and half-rimmed the glass with a combination of hawayej, sugar, salt and cumin, garnishing with sage. The aroma is heavenly.”

“I’m fond of naming my cocktails after songs, so I present to you Into the Mystic by one of my favorite artists, Van Morrison,” Lukas adds. New Yorker Paula Lukas moved to New Jersey when she was a kid, but her heart remained in The Big Apple, so she moved back in the 80s (the decade of excess!). She began performing in musical theater and knows that her love of performing and creativity have been assets in her restaurant positions. The bar is her stage.

The hospitality business has changed quite a lot since Paula was mixing cocktails like Sex on the Beach and the Woo Woo. After an impressive tenure all over town as bartender, head bartender and bar manager, she was able to use her creativity to curate successful cocktail menus. Armed with a motherlode of experience, she took the giant step into competing then judging, namely the Marie Brizard finals in her hometown and the Bartender Spirits Awards in San Francisco. They also named her one of the leading bartenders to look out for in 2020. Her cocktails have been featured in the New York Post, Huffington Post, Food and Wine and Chilled Magazine.

Today she is head bartender and bar manager at Nur, a critically-acclaimed modern Middle Eastern restaurant. There, she’s been able to use her creative flair and access a wider array of spices and herbs to create a variety of specialty cocktails.